VoxPop Games is a profit-sharing, P2P distribution platform for indie games. We talked to the executive team to learn how it works.

The indie game distribution landscape is the domain of a few major clients – Steam, Itch.io, and Epic Games. VoxPop Games, however, is a new entrant that’s aiming to shake things up with transformative systems that give back to the community.

At the heart of VoxPop Games is a profit-sharing system that pays a share to users and streamers who recommend games. The client is also peer-to-peer based, which when combined with the profit-sharing system, means that users can also make cash by ‘seeding’ files for download by other users.

In the indie games space, where visibility and promotion can be rather difficult for already hardworking developers, VoxPop Games plans to change things by incentivizing word-of-mouth promotion and streaming. Check out the company site here, and the store here.

– Tell us about how VoxPop Games originated and what the journey into 2022 has been like.

MR: Charles & I had been running in similar spaces in the New York Indie Games scene, me having my consulting firm, GrummelWrks, I had been scouting a few PLAYNYC events, NYU Center Game Jams & the like.

CY: At the time, there was this resurgence of interest in making games, but so many developers were struggling to promote them. The churn rate was depressing to see – guys would make like one amazing game and drop out to go do retail or something.

MY: Charles sold me on the idea of a profit-sharing system which would allow developers to use some of their future income to drive influencers to pick up their games. I saw the potential in that. Time has proven us right in a way: Among Us was a bit of a flop back then, but thanks to influencers picking it up during the pandemic, it exploded nearly 3 years after release. It shows how important influencer marketing is to indie devs.

CY: We’re still grinding away at VoxPop. Things are early and the future is never certain of course, but we’re beyond proud of what we’ve been able to accomplish with such a small team. 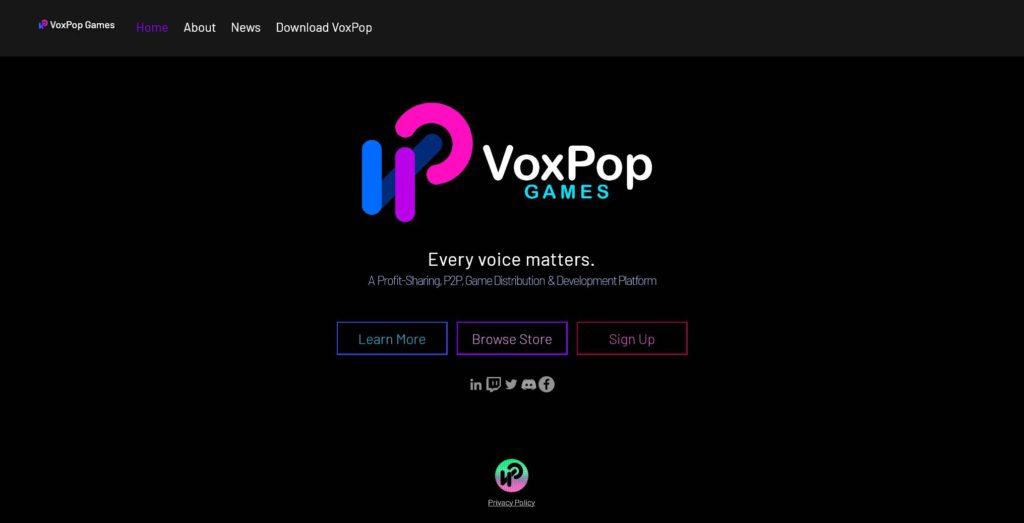 – VoxPop Games distinguishes itself from other game distribution platforms by being Peer-to-Peer (P2P). What does this entail?

MR: We incentivize all aspects of our storefront, from usage to seeding, to getting your friends and family to sign-up to engaging with your audience as a streamer and having people passively support your channel by purchasing the games you are playing for them on stream, utilizing their VoxPop User Account Recommendation Links (just like anyone would place a Patreon link or a Ko-fi link in their commands or VOD descriptions).

CY: From a technical perspective though, being peer-to-peer has benefits for users who live in parts of the world that are not as thoroughly covered by cloud computing services. It can also help VoxPop keep running when those services go down. It’s also a good way for us to minimize costs by reducing the amount of data we are responsible for. 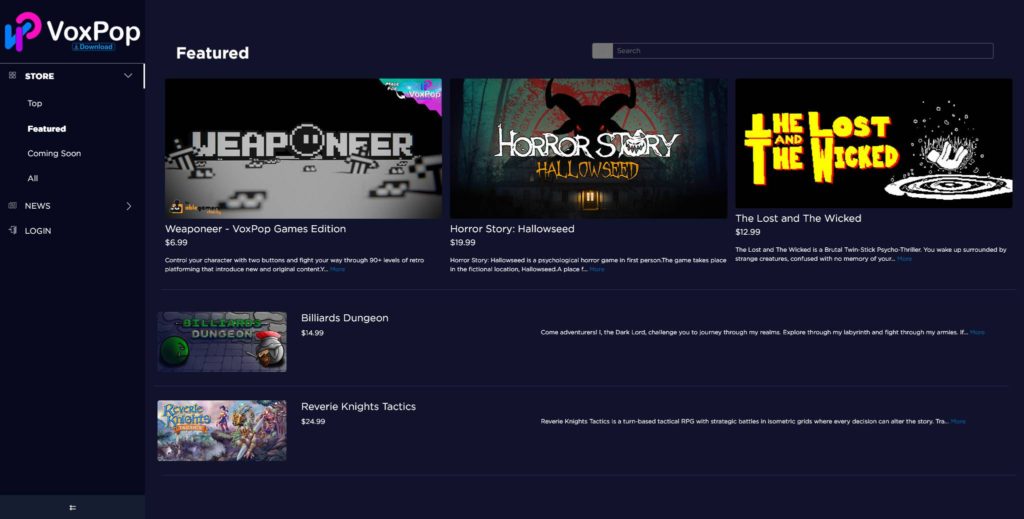 – Apart from distribution, VoxPop Games is also a development platform for video game developers. How does this work?

MR: We pride ourselves on being the first of our kind in many aspects of Games Distribution and development here in the lovely Republic of Brooklyn, NY (lol).

In all seriousness, we have done many things for our developers. In addition to assisting with their efforts to promote themselves, we have also assisted in the development of some of our exclusive titles. EALU is a good example of a game we were able to help with writing, design, and QA. With other games like WEAPONEER or Swordcar, we have helped in securing partnerships with publishers and other organizations.

The goals of our Development arm are as follows: Expand, Polish, Grow.

CY: Beyond this, we have other plans for the future as well. A profit sharing system has the potential to revolutionize how indie developers handle hiring, for example, by finding talent who will be paid via a percentage of the profits. There are all sorts of development verticals that a profit sharing system can tackle. 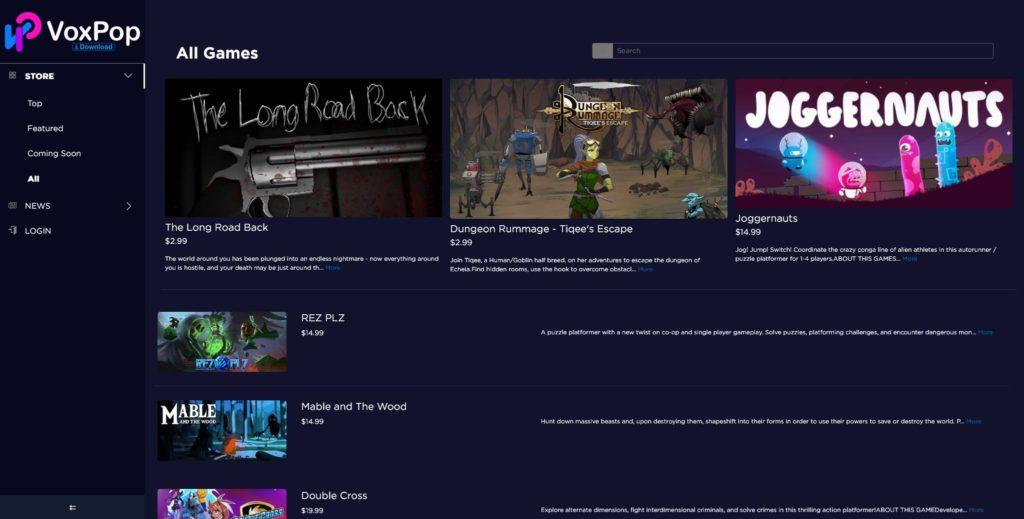 – Are the games distributed through VoxPop’s client available DRM-free?

MR: VoxPop is a secure client application and many of our toolsets need direct platform security.

To that point, many of our indie publisher partners enjoy the security that our platform offers for their licensed IP products, we know there are other platforms that exist in the DRM-free space, VoxPop’s toolsets however, P2P/user profit sharing incentive/client gamification suites all demand that we have our products secured by our client application.

– What are VoxPop Games’ community features?

MR: Currently, we bolster about 95+ Twitch Streamers listed as early partners on our site, and we have a slew of over excited Independent Developers on-boarded and excited about what VoxPop has to offer: (VoxPop Games Social Channels / IGDANYC – Partner / The Geekoning Podcast),

Our client features a v1 Bounty Board system that allows influencers and devs to headhunt each-other to bargain over specific buffs for games that are advocated and that provide new sales for the developers and publishers – user story: a VoxPop dev wants to scout a cool up-and-coming influencer, he can use VoxPop’s Bounty Board to set a specific rate of payout for each game sold to their viewers, let’s say $2USD per each sale made from that streamers VoxPop Recommendation link, that streamer then streams the game, shares his link, gets their audience of unique viewers per stream to purchase the $15 dollar game, let’s say they sell 50 copies, they just made $100USD off a stream that might have lasted about an hour.

Of course, larger influencers can make more, but this allows for smaller developers & smaller content creators to lift one another collaboratively, by using VoxPop’s client as a trusted source that everyone will get paid efficiently and without any additional middleman headaches. 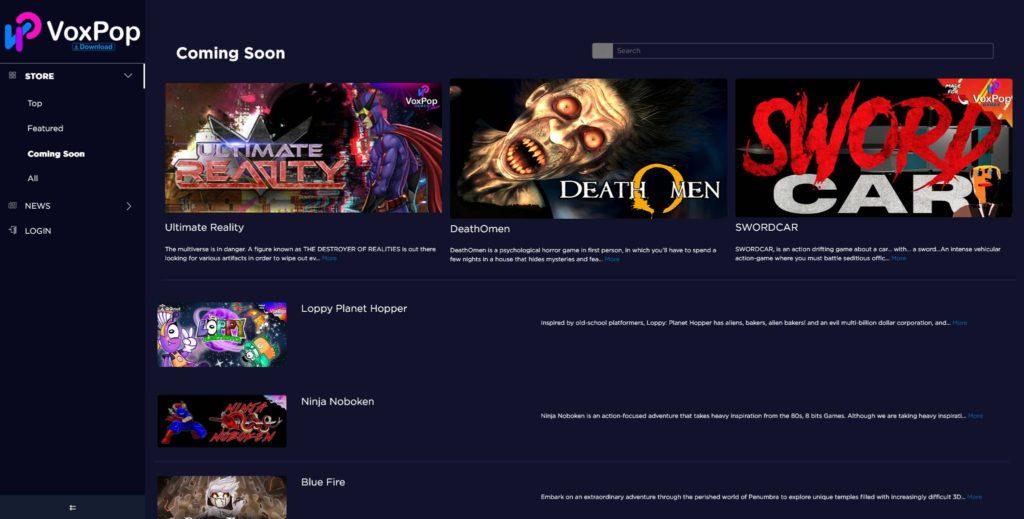 – What are some game developers that VoxPop Games has partnered with?

We welcome all indie developers, without restriction, however. Our storefront has curation via our core team, but we are open to anyone with an amazing game loop and a dream to become the best game developer that they wish to be.

CY: VoxPop doesn’t demand exclusivity from any of our partners, for those who wish to work closer with us we have our “Made For” VoxPop project. These are devs that provide exclusive content for the VoxPop version of their game.

VoxPop is becoming the “indie definitive edition” hub for many games that have gone to other platforms first, and have been reworked and enhanced to be placed as all new experiences with all new content, that can ONLY be found on VoxPop. 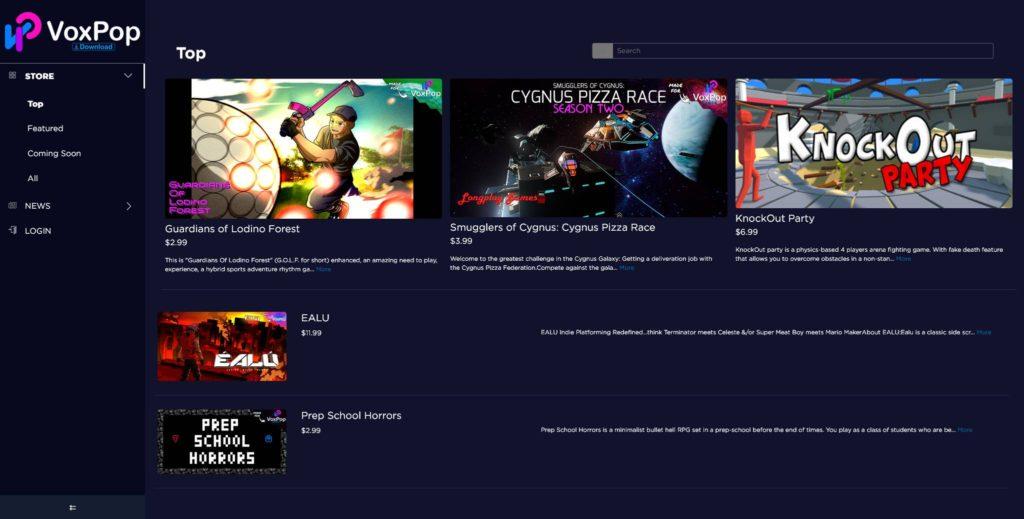 – Tell us about the future roadmap of VoxPop. What can newly-joined players expect in the near future?

A profit-sharing business model has numerous applications in the industry, especially for independents. It has the potential to disrupt everything from hiring (work for a percentage of profit) to crowdfunding (paying dividends to backers). And, of course, as a games platform, we always have the opportunity to pivot into development or publishing.

MR: Beyond that, obviously, we’re working on more partnerships with indie devs & publishers, while pushing and marketing the games that we have on our current roster, pushing over 275+ in contract for distribution, working alongside properties that are newly established IP’s, like Ninja Noboken, & CC0 offerings or Web3 adjacent titles, like Chain Runners: Liquid, to enhancing the voice of punk-rock stylings that Rogue Games & SpaceMicroscope (dev) offers in the “Made for VoxPop” version of SWORDCAR.

The future is closer than you think and we hope that our offerings and plans for the next few weeks & months ahead garner the attention of the community that we are looking forward to raise-up and promote. VoxPop is & always will be INTO INDIE GAMES.

Check out VoxPop Games at the official site here, and at the game’s store page here (where you can download the client too). You can stay updated via their Twitter too.

Don’t forget to check out our round-up of the latest indie releases popping this week!