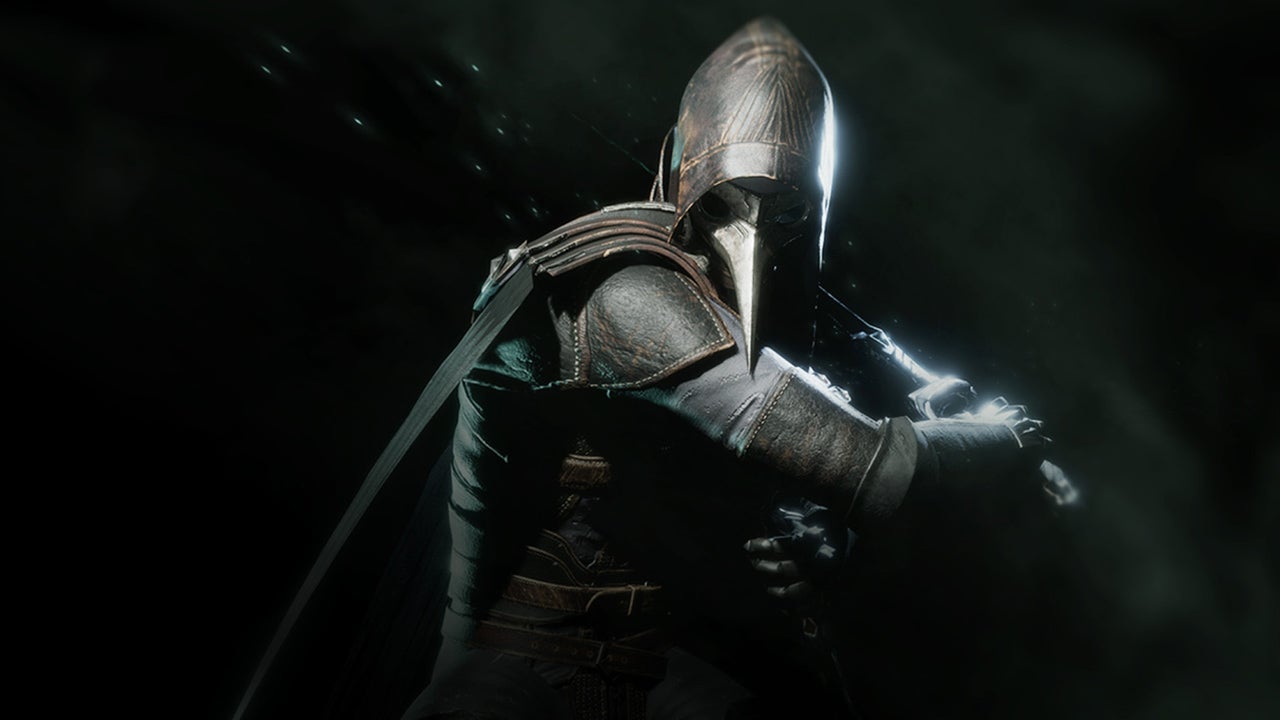 It’s always a shame when a game manages to get some things so right but others so wrong. OverBorder Studios’ third-person fantasy RPG Thymesia is a prime example of this, with satisfying, high-energy combat that rewards patience and a familiarity with its admittedly narrow progression systems immediately standing out as something special. At the same time, its twisting tale about a plague-torn kingdom and the secret agent that can save it, as well as the inconsistent quality of the exotic locations it takes place across, are largely half-baked and render the entire adventure easily forgettable.

Thymesia’s story follows Corvus, a generic but well-dressed royal operative who’s had his brain scrambled like a breakfast egg. That’s likely a consequence of his direct involvement in a plague spreading across the country, a disease that empowers some creatures while maiming, killing, or mutating the rest. With the help of an underwhelmingly cryptic childlike ally, you must climb into the dark, goopy void that is your memory to remember how you got here in hopes that you can find clues on how to undo this tragedy.

I really liked this story setup at the start, but I couldn’t have cared any less about Corvus’ mysterious purpose by the end of the roughly eight-hour journey. This is partially due to there being surprisingly little dialogue and very few NPCs to pry information from, with most of the plot delivered through notes dropped across the maps for you to spend time collecting and deciphering. This sort of storytelling has lost its shine a bit after being leaned on so heavily in games like this over the past decade, and even ignoring that fatigue Thymesia’s notes aren't written in an especially compelling fashion. Also, the story itself is tried-and-true territory when you get past that opening pitch – the fact that it's based in a conspiracy swirling around magical blood that turns people into monsters doesn’t help Thymesia shake the “Bloodborne-clone” allegations.

Corvus’ memories take place in three locations. Two of them, the Sea of Trees and Hermes’ Fortress, are largely bland environments that you’ve probably seen done in other games before (and likely better). The foggy plague swamp of the former features lots of rope bridges and treehouses that look so alike under the putrid haze it becomes hard to navigate. The latter is just a medieval fantasy fortress, dilapidated and casting a shadow on some sparse forest areas around it. The swamp at least had the occasional scary, hammer-wielding mutant to spice up the journey through it, but the fortress is packed with generic knights of various stripes, with no real visual or thematic surprises to be had.

Most of Thymesia's locations are bland and unoriginal.

The mundanity of these stages is made far more dire when compared to the third area, the Royal Garden, which is genuinely one of the most interesting environments I've seen in a game like this. It begins as a sort of bizarre set of greenhouses where large twisted flowers grow, and descends into a library submerged ankle-deep in blood. You can go even deeper on subsequent visits via sub-quests, eventually into an entire blood cave, teeming with a creep factor that stands out among a genre defined by it.

You’re able to revisit the other two locations in sub-quests as well, but their creative flourishes are limited to simply changing the path you take through them and switching up which doors are accessible. When you do get to explore previously uncharted locations, there’s nothing dramatically different about them. Needless to say, doing these optional bits in places that weren’t the Royal Garden was a bit of a bore.

These sub-quests are technically optional, but the things you find when you complete them are essential to figuring out how to end the plague and fix the world. (You could absolutely beat Thymesia by completing only the main missions, but the resulting conclusion to the story might be lackluster.) There are several different endings you could land on based on a few factors I won’t spoil, and I would have been motivated to see them all if you didn’t have to repeat the final boss fight every time to do so – especially when the only thing that really determines the ending, besides having the right items and information, is how you choose to use them after the final fight. And in reality, even the “good” ending is a bit of a disappointment, as it plays out in a simple slide show of inky images with some sparse text blocks.

Despite the story’s shortcomings, Thymesia’s combat is its main highlight. Corvus moves swiftly, smothering his enemies in a barrage of blades and dipping out of range just before they can counter cleanly. There’s no stamina bar to contend with here, meaning the limiting factor of your attacks is simply the length of a combo string, similar to a fighting game. By default, there's no blocking either, meaning your go-to defensive option is either a parry with pretty tricky timing or a reliable dodge. Deflecting an attack sends damage back to the attacker at a decent rate, making every little encounter a choice between passively waiting out an enemy’s series of attacks and striking during the down time, or being proactive, absorbing the damage with well-placed parries to soften them up before it’s your turn to strike.

Combat is largely a back and forth like this, since there’s no reliable way to stagger enemies. They can be staggered, or course, but how and when almost always felt like a crap shoot – an unpredictability that also applies to when baddies decide to counter you. Apparently, there are a limited amount of attacks you can freely land on an enemy before they will counterattack, but you’re never actually told exactly how many that is, even though you get access to skills that can affect this hidden feature in various ways. This is largely moot by midway through the campaign though, because most enemies outside of bosses become pretty trivial as you get stronger.

When slicing and dicing, you have to be aware of the dual nature of an enemy’s life bar. Your normal sword attacks damage the white portion, which exposes a green bit under it. The white bar will refill unless you use your spectral claw attacks to damage the green portion, shortening the bar permanently. Weaving sword and claw attacks deliberately is key to efficiently dispatching your enemies, but since these attacks don’t directly link to one another in combos, the dance can sometimes feel clunky. But for tougher enemies, racing to effectively “lock in” the sword damage done with some well-placed claw attacks while dodging their big moves was a major part of this combat system’s unique tension.

Bosses come in two forms: very large, gimmicky pushovers, and nimble mudhole stompers. The former have more creative designs but way easier patterns to learn and avoid, making them more “experiences” than actual challenges. Even still, one of these fights was one of the most memorable parts of Thymesia, having me run through a series of platforms to burst plague cysts and clear fog while a giant thrashed the place around me. The latter fights resemble your more standard one-on-one encounter, where a boss has a large list of possible ways to kill you quickly and you have to dip, dodge, and deflect a lot to avoid getting mopped up. These get easier over time as you get stronger, but that very first card-throwing-carny in particular feels like a large, thick, and frustrating skill wall.

Getting stronger involves the usual collecting of a currency from enemies and spending it to raise stats like health and damage, but you’ll also collect and enhance plague weapons: secondary attacks that mimic the armaments your enemies will use against you. These weapons give you powerful abilities to vary your offense, like big heavy hammer blows or a quick and accurate bow. Most interestingly, you can steal a one-time-use version of plague weapons from enemies, giving you yet another layer of offense on the fly. This was especially great for elite enemies and bosses, who usually have powerful abilities at their disposal.

The talent tree can also tweak Corvus’ moves or change them completely. There’s an upper limit on how many talent points you can have, meaning you can’t simply max everything out, so making good choices is key to turning you into a true killing machine. Options like extending the deflection window or changing your counter into a block are interesting, but I leaned more into the abilities that gave me offensive buffs when I dodged attacks at the last second or extended my normal and claw attack combos. Synergizing these with health gain and dodge extension options let me fine tune my playstyle, but most options modify your play with passive enhancements or added utility rather than overhauling the way you interact with combat completely. That’s not a bad thing, necessarily, but it does limit the scope of what’s possible in combat, and folks who love strength-focused, big-weapon-smash builds will be left wanting here.