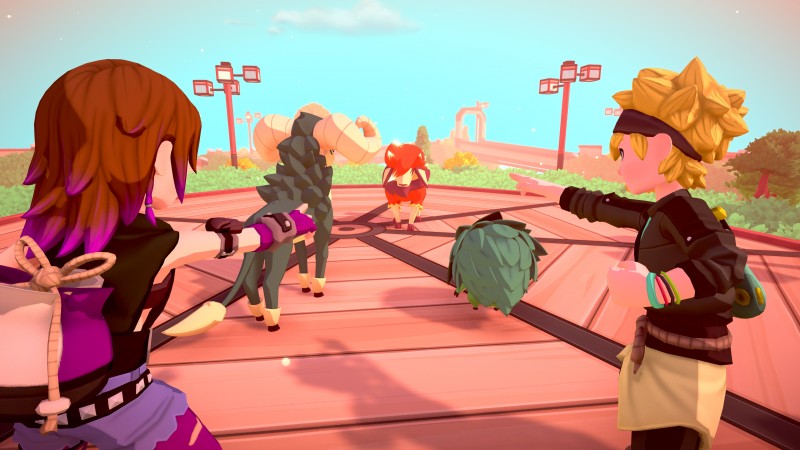 The Pokémon franchise has been more prolific than usual as of late, with multiple releases over the past year and another big entry coming soon. However, those without a Switch or looking for a suitable monster-battling alternative should focus on Temtem, which has emerged from years of early-access development. While borrowing heavily from the formula of Nintendo’s massive franchise, its world is fun to explore, and collecting and learning all about the titular Temtems is satisfying. Although the core adventure is a smidge repetitive, Temtem is challenging and engaging, even for well-seasoned trainers.

Your Temtem journey begins by selecting a partner monster and setting off to challenge the various dojos (Temtem’s version of gyms) around the Airborne Archipelago. While exploring this series of vibrant floating islands, you gain rivals, challenge dojos, and butt heads with the dastardly Clan Balsoto along the way. The pieces of a classic Pokémon experience are here for better or worse, and while that predictability bored me in the early hours, the story eventually arrives in some cool places I didn’t expect, making Temtem feel more like an “us against the world” JRPG than a typical monster collector tends to.

The biggest draw to this genre for me is collecting as many of these cute and destructive creatures as possible. While the lack of variety and abundance of forgettable designs on the first island disappointed me, each subsequent area introduces more enticing monster designs and elemental combinations. My favorites include the deceptively cute Adoroboros and the fiery electric scarab Scaravolt. Figuring out the location of a monster I needed to fill out my Tempedia or one that would complement my current competitive team was a blast.

The hunt for new Temtems is exciting, but I’m even higher on the battle system. These fights are strategic and challenging to the point where every tamer battle made me consider my team composition right down to the order of my squad. Contrary to the way most trainers compete in Pokémon battles, the default way to throwdown in Temtem is 2v2. It’s a twist I enjoy that deepens the strategy in just about every battle. I often had to solve battle-based puzzles, like whether my active team is the dominant duo on the board or if they’ll be quickly wiped out by well-matched opposition, with the latter case happening quite often.

Another wrinkle I love in battle is the stamina system. Each move uses a portion of the Temtem’s stamina gauge, with lighter blows consuming far less than haymakers. However, using more stamina than what’s available takes HP, creating a high-risk, high-reward scenario for making a desperate all-out attack at the cost of your team’s health. It’s a clever solution to spamming powerful attacks, and it results in more deliberate fights, especially when going toe-to-toe with other aspiring tamers.

The online features flourish when I interact with others. Throughout the adventure, you see tamers running around with their partner ‘Tem in tow. You can challenge them to a battle, trade, or chat about where to find a monster. An always-available rolling text chat also lets you talk with a world full of active players freely. The lack of a barrier to communicating or participating in fights and grouping up with others is refreshing for the genre and should be looked at seriously by companies like Nintendo as a feature to strive for.

There’s plenty to do with tamers online after the main scenario is done. On top of the competitive activities on hand, like joining a club and participating in Dojo Wars, I’ve kept busy with Temtem breeding, skimming auctions for monsters and items, and exploring the player housing neighborhoods that can be decorated with furnishings purchased all across the Archipelago. With all of the above and more to do, there’s plenty of endgame content for those who wish to stick with the game long-term.

Temtem may look like a copycat on its surface, but its deviations from the Pokémon formula pay off considerably. With unique battling elements and an engaging MMO structure, Temtem evolves as its own experience and offers a vast, challenging adventure that even those without a Nintendo console can enjoy.

...
admin
We’ve known for a while that E3 plans to return in 2023, but now that we finally have concrete dates and a bit more information on how the event will run, we have to ask: will it be how you remember it? E3 is known as a bombastic week that celebrates gaming across all platforms, but with Sony having left the show even before the pandemic, and with companies being forced to rethink...
admin
I’ve not reviewed that many role playing games but I’ve read and played enough to have formed the following opinions, which I’m now going to inflict on you, the reader. Layout Switching between one and two columns multiple times on The post Common Mistakes in Self-Published RPGs For You To Avoid appeared first on 6d6 RPG. ...
admin
An ambitious but overwhelming alien invasion strategy game. ...
admin
Reviewed on: Xbox One Platform: PlayStation 4, Xbox One, Switch, PC Publisher: tinyBuild Developer: Splashteam Rating: Everyone 10+ Tinykin smartly blends platforming and puzzle-solving with the minion management of Nintendo’s Pikmin series. Players control a flea-sized astronaut who travels from his home planet to Earth to trace humanity’s true origins. The explorer’s journey takes him to an ordinary home occupied by sentient insects who worship a mysterious deity. To...
admin
Welcome back to IGN Game Scoop!, the ONLY video game podcast! This week your Omega Cops — Daemon Hatfield, Sam Claiborn, Justin Davis, and Mark Medina — are sharing their most-anticipated games of 2023. That means The Legend of Zelda: Tears of the Kingdom, Resident Evil 4, Redfall, and more. They’ll also check in with the Nintendo Seal of Quantity. Daemon has been playing Return to Monkey Island and Mark has been playing...
admin