A few years back, I reviewed an enjoyable puzzle game called Circix (Free). In that game, you had to connect circuits in the correct fashion to get past each stage. Setting aside the theme, the core puzzle of the game was in thinking about how each node had to relate to its neighbors. Well, the developer behind that game recently released a new puzzle game called Taps ($1.99). On the surface, it’s completely different from the neon electronics theme of Circix, but it follows a similar idea of building its puzzles around logical relationships. Taps feels more polished, more unique, and more carefully thought-out than its predecessor, and it’s just as devilishly challenging once it gets going.

Taps is a little hard to explain, but let me give it a try. Each level presents you with two 6 x 6 grids of numbers. Your goal is to make the bottom grid look like the top. Tapping on any point on the grid makes the number on it and its cardinal neighbors increase by one. Double-tapping decreases the numbers by one. You can only activate each point once. Tapping it again simply returns it to its inactive state. It’s pretty easy in the beginning, as it’s rather obvious where you need to tap in order to avoid any of the numbers going over, but it starts heating up about halfway through the standard set of puzzles. The advanced puzzles add in the double-tapping mechanism right from the start and begin getting a little tricky before you’re even through the first set. 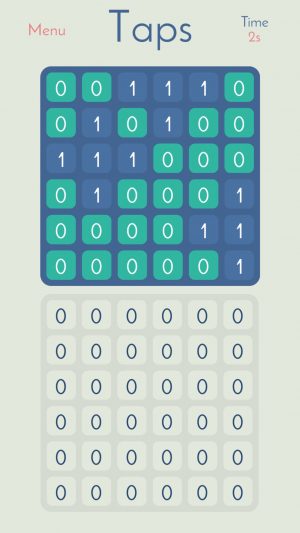 The game includes three different modes of play. Standard mode contains 100 levels that only use the single-tap mechanic. The earlier stages usually only require you to tap a few numbers to win, while the later ones require as many as 21 taps. Once you get a feel for how things work, clearing these stages is a fairly methodical process no matter how complex they are. It’s sort of like Picross in that as you play the game more you learn to seek out that one loose thread that unravels the rest. The Advanced mode contains another 100 levels, this time with the double-tapping mechanic in play. It’s no less of a logic puzzle, but it’s a lot more difficult to keep track of the sequences of moves you need to take. Finally, the Custom mode allows you to generate a level with your desired difficulty and set of rules in action. This is where you’ll be spending your time after you beat the other two modes.

Completing both of the campaign modes will take you at least a few hours, and with leaderboards in place tracking your best times for each difficulty level, there’s plenty of reason to keep playing the custom mode after that. If you’re not concerned about the leaderboards, however, there’s no reason you can’t just chill out and take your time on each puzzle. Taps takes well to this kind of approach, actually. There’s no penalty for taking back any of your moves, the game’s appearance and UI are soft, and the wonderful soundtrack is mostly made up of lively jazz. One of my major criticisms about Circix was how empty its presentation felt without any music, and the developer has certainly corrected that here.

Taps is a little too slow to get going properly, and the late game screams out for at least one more layer of complexity or a twist of some sort. These aren’t huge problems but it does lend the game something of a rote feeling after a while. You’ll learn every technique you need to learn by the time you’re less than halfway through each mode. After that, you just have to apply those techniques logically to see every subsequent puzzle fall before you. Oh, you might make a few mistakes here and there, but those are easily corrected. Those looking for a nail-biting, tense challenge probably won’t get into Taps. This is about untying knots, and like that job, it’s best approached in a calm and orderly fashion. 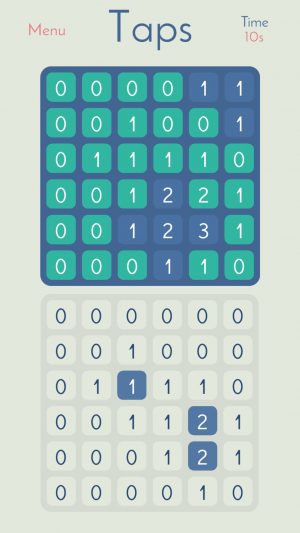 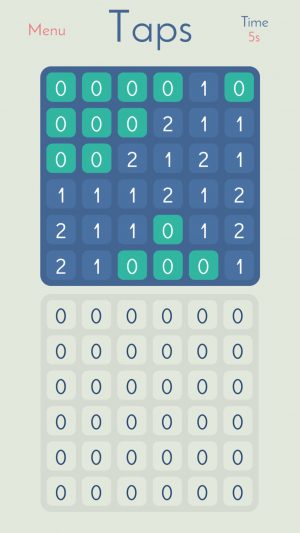 If you don’t mind that sort of leisurely pace, you’ll probably really enjoy Taps. It’s a very soothing game, and I think it’s a better experience all-around than Circix was. I also like that’s it’s not trying to sell me anything extra or make me watch incentivized ads for retries. That feels like it’s becoming rare in the puzzle genre on iOS these days. Mellow though it may be, Taps is a pretty good time for those who enjoy plowing through piles of logic puzzles.