Hi readers! I am a brand new solo game developer who has just founded my own company, 88 Polygons Ltd, where I’m developing Super Trunko Go!

With over a decade worth of game related experience, my career started straight out of being an animator graduate, falling into my first job doing only animation. The turning point was when I moved to Hong Kong, into a completely different work environment, which then forced me to explore other aspects of game development and expand my skillset to become a “jack of all trades” type of man.

Well, we’re back in the UK now, and along with all the changes that were happening, I decided to take the leap to get myself out of my comfort zone and do something that I have always wanted to do: make my own game! What can be more exciting than having control of every aspect of my game and making use of all the skills I have harnessed? It was about time I tried something new!

88 Polygons Ltd.’s first game is ‘Super Trunko Go’, a twin stick shooter game inspired by my enjoyment of shooter games from the SNES days of of ‘Pop n Twinbee’ and ‘Smash TV’ to modern shooters with platform elements like the recent ‘Mega Man 11’ and even the 3D adventure exploration side of the recent Ratchet and Clank games.

These games inspired me to make my own twin-stick shooter, but the next big decision was whether to go 2D or 3D. 2D shooters are great – I respect the format – however in the end, I chose the latter. The main reason for that is the additional dimension it allows players to explore, which adds more gameplay depth. 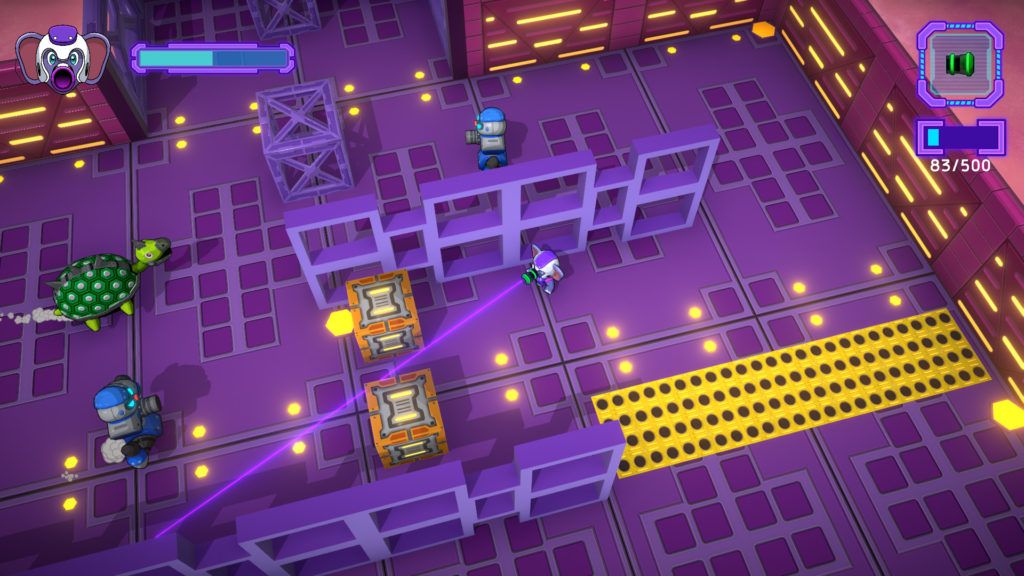 Who is the protagonist and what do they look like?

The conventional protagonist of a twin stick shooter is a human character that usually holds a weapon of some sort. However, I wanted to explore further for an alternative, whatever it may be.

I referred back to my inspirations, where I had thought “How about an animal, instead of a humanoid character?”. I cycled through in my head the prominent animals in the animal kingdom and I tried to envision how I could incorporate a firing element to an animal.

At a moment, an image of an elephant popped up in my head which I can recall seeing something before from a documentary that squirted water from his trunk. Voila! A twin-stick shooter starring an elephant that fires projectiles from his trunk. 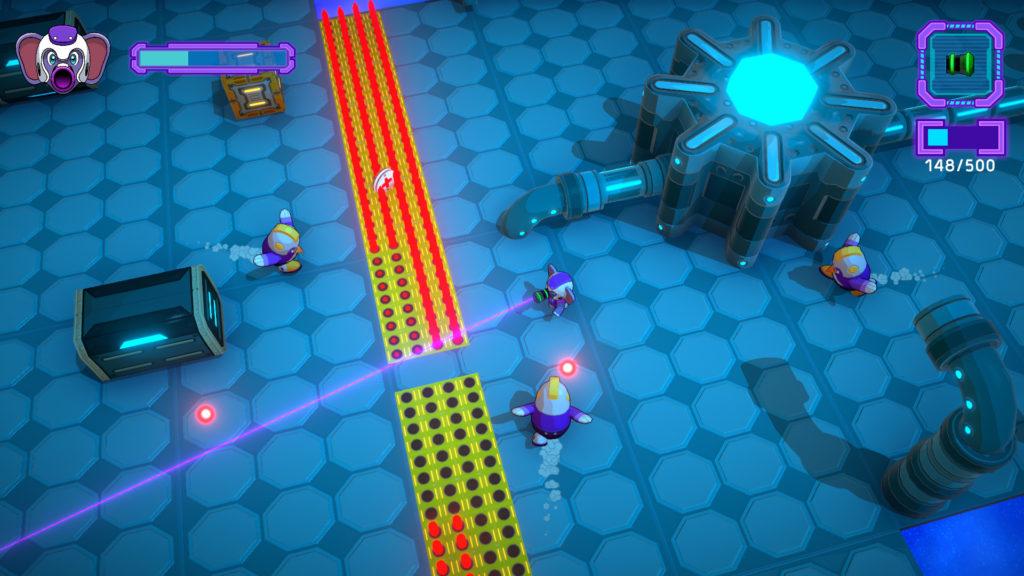 What should the theme be?

I didn’t really explore many themes for my game but dived straight into wanting a space/sci-fi scenario as the setting for my shooter. Having played games like Ratchet and Clank and Megaman in the past, the space/sci-fi scenario made me realise the potential for accommodating a lot of open and wacky ideas.

So from there onwards, it was the beginning and birth of Super Trunko Go! Super Trunko is the name of the protagonist – it was pretty much a direct reference to its main feature a trunk, which is cliché, but I like it. 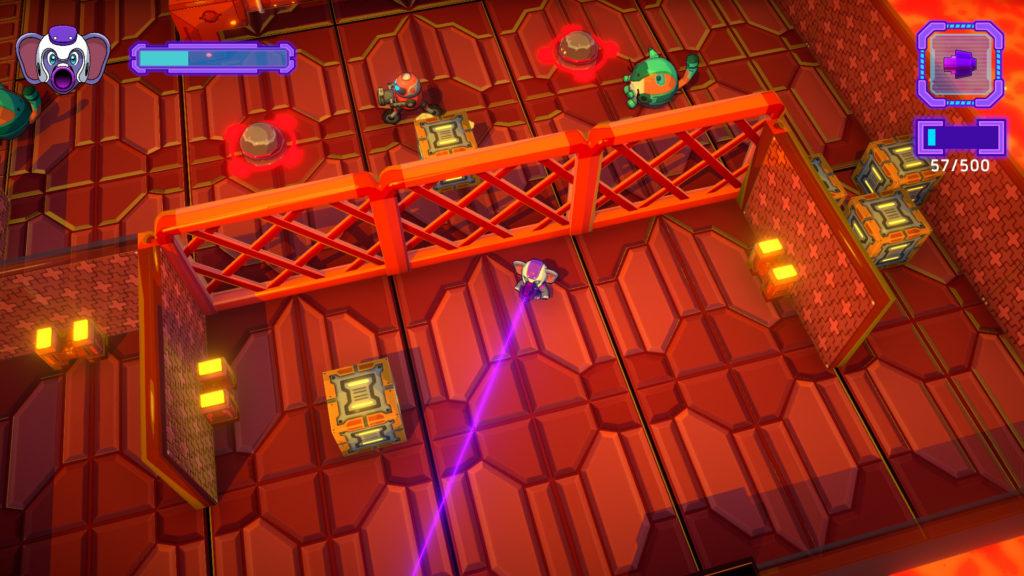 Hardships along the way

As a solo dev, making Super Trunko Go has its pros and cons. One of the good points I’d like to mention is the freedom to delve into whatever I fancied making first. This could be drawing a level design or to make a 3D character, rig and animate it etc. The control of managing your time can be relaxing, but at times, you have to make a mental note that you cannot be too complacent.

One of the cons of solo development is that at the end of the day, you are on a lonely journey and you have to be disciplined to manage your own time and to make decisions yourself.

I am not a master of everything and I had struggles, particularly getting the design aspects of the characters to visually blend well together and not look off. Getting the right colour scheme was a challenge too, and I have made endless revisions. Furthermore, there have been a few initial enemy designs that didn’t work out and didn’t make the cut for the game. 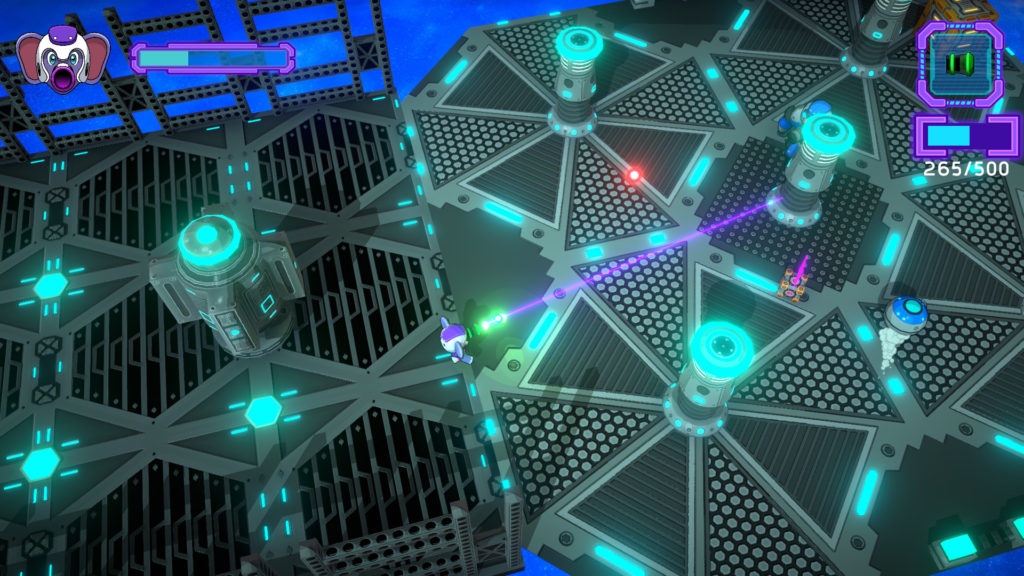 While the design of levels and characters was pieced together, the basic gameplay aspect was quite straightforward and very similar to most twin stick shooters. You control Trunko, equip yourself with whatever weapons you can find and blast all the enemies you see to activate zone points to progress further in the levels.

Most twin-stick fans just like blasting things so I included four different weapon add-ons and plenty of crates for destruction. At the back of my mind, I still wanted to add more to the gameplay, and so I added a jump feature which many twin-stick games lack. With this feature added, I then proceeded to include platforms and obstacles that requires the player to jump in order to access further. 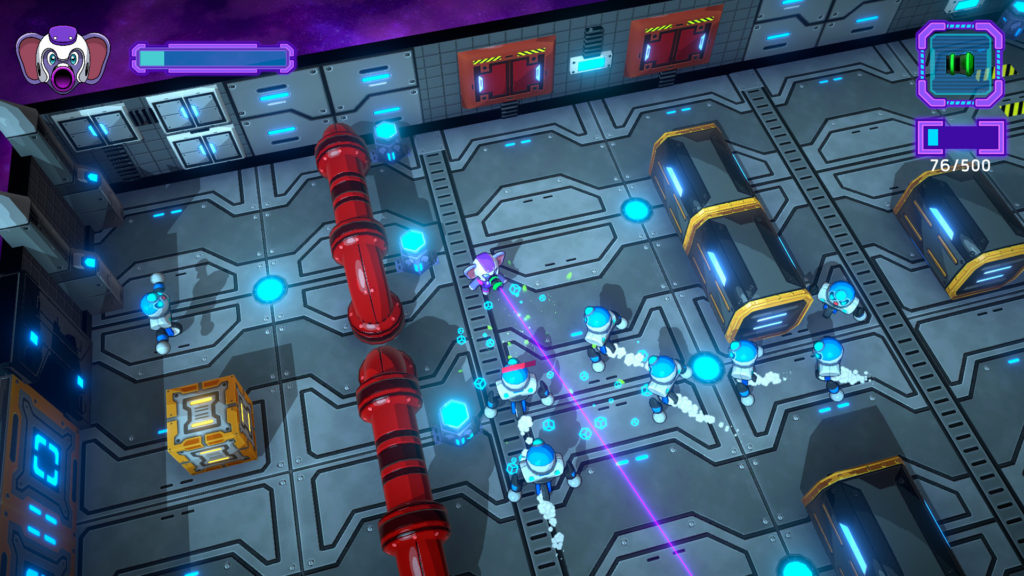 My journey of making my own game brings us to the present – Super Trunko Go now has a demo that has just been released on Steam. This is a great opportunity for me to gather feedback for the game.

So far, some players have suggested that it was too easy, and some have come back to me saying it was too hard. I guess everyone has different game playing experiences and not everyone may have prior twin-stick shooter gaming experience. Some things like enemy movement speed and projectile speed have been altered since. Anything to help make this game a fun and memorable engaging experience. 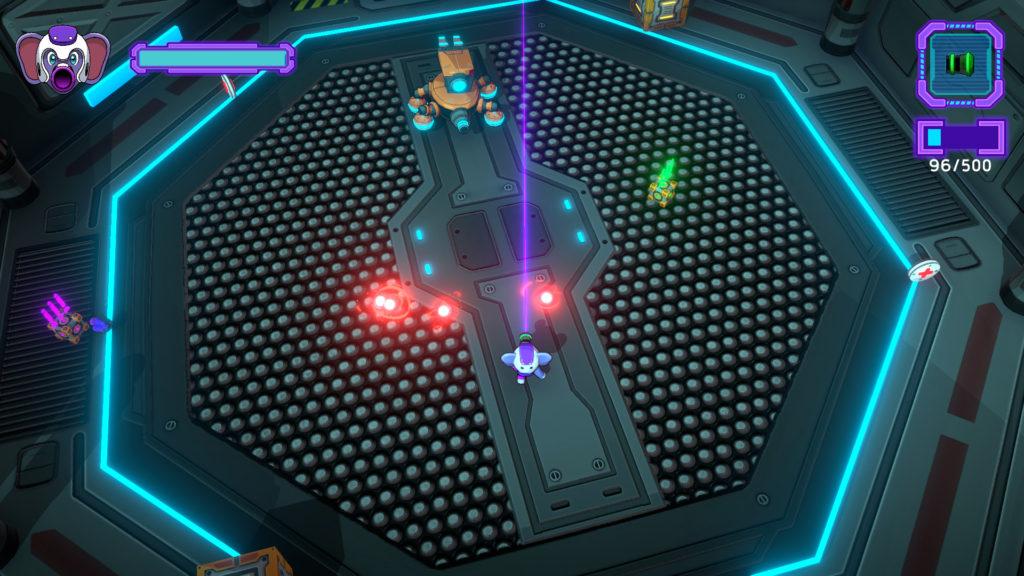 Super Trunko Go’s expected release date is due for sometime late 2022 to beginning of 2023. Come give my game’s demo a try. Find us on Steam and add us to your wishlist!

For more game previews hosted on Into Indie Games, check out the Previews section here!