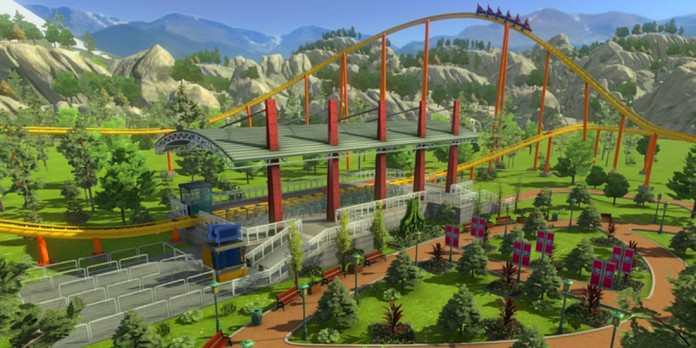 During the Early Access period, participants will help shape the final details ofRollerCoaster Tycoon World and provide invaluable input as the title rolls to a full launch. As we are not yet feature complete, fans can expect a number of new features, optimizations, and enhancements to be released during and after the Early Access period. These include, but are not limited to, Dark Rides, Transport Rides, and Piece by Piece Custom Built Structures.

Key Features available with the Early Access launch of RollerCoaster Tycoon World are:

·         Genre-Redefining Coaster Builder: Spline-based, 3D track editor allows for the creation of the most creative freeform coasters imaginable. Easily manipulate the track to build the tamest to most puke-inducing coasters by creating loops, banks, corkscrews, inversions and more. Players have the power to test roller coasters before opening the ride to guests to ensure it meets the physics standards required to stay on the track, or the coaster might just jump the rails.
·         Responsive Environments & Guests: Themed zones can be created throughout a player’s park, with various themed rides and objects affecting how much guests enjoy the experience. Sci-fi, Western, and Adventure are just a few themes that will impact not only ratings, but increase the area’s attractiveness to certain peeps.
·         UGC Functionality: For the first time, modding capabilities are integrated directly into the game. Native support of Steam Workshop allows for customer scenery, 3D objects, blueprinted coasters, parks, and more to be imported into the game and seamlessly shared from within the game. The UGC tools have been designed to be accessible and easy to use for everyone.

“Our realistic approach to the graphics and gameplay, combined with several next-gen updates is breathing new life into a franchise that has stood the test of time,” said Matthew Labunka, Executive Producer of RollerCoaster Tycoon World, Atari. “This is just the start for RollerCoaster Tycoon World, as we look to the future of the title and how we continue delivering a fun, immersive experience. Opening up the game to UGC natively allows for unlimited creativity and expansion for years to come both for us and the community.”

RollerCoaster Tycoon World will be available in a Standard Version for $49.99 USD and Deluxe Edition for $59.99 USD.