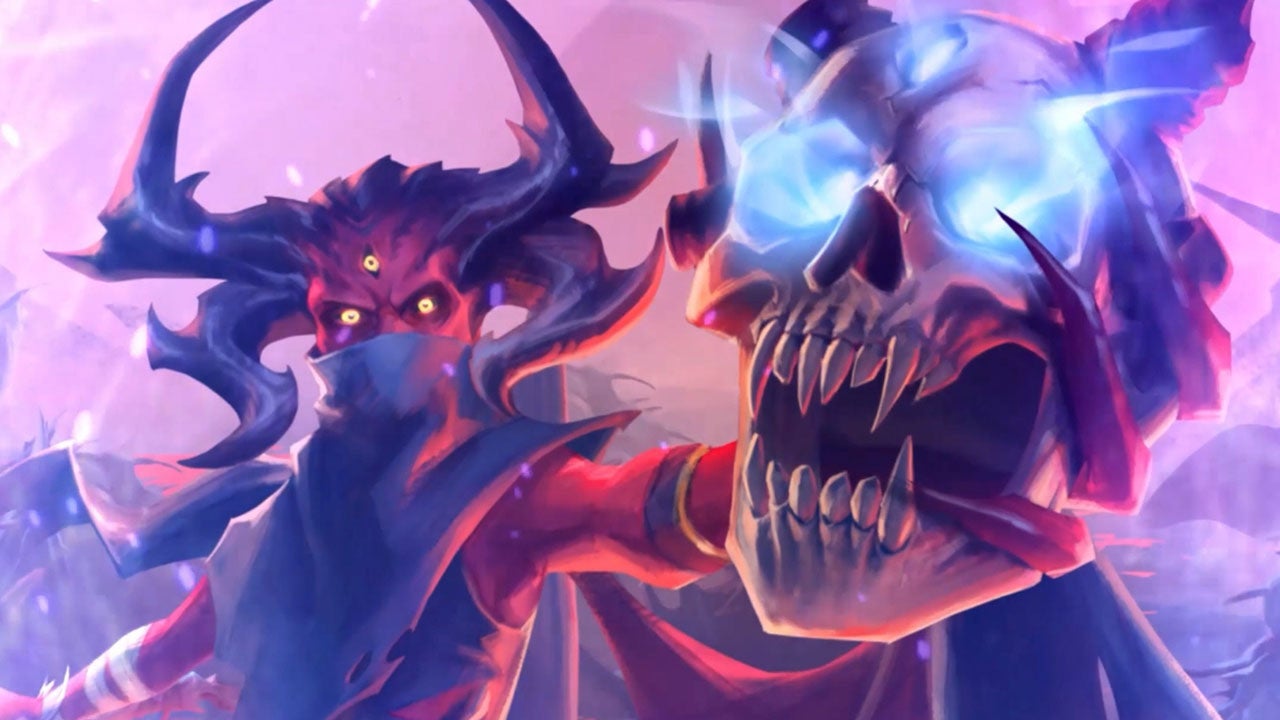 With the demon-rousing riffs of Eddie Munson’s Master of Puppets performance in Stranger Things still fresh in our social feeds, the timing could not be more ideal for Metal: Hellsinger to strut out onto the main stage and adopt an imposing power stance. Taking the love affair between Doom and heavy metal music and melding it into an official marriage, Metal: Hellsinger’s rhythm-based rampage through the fiery depths of Hell had me gleefully headbanging along to every heathen-seeking headshot. I couldn’t help but be disappointed, though, that much like the ethos of the musical genre that powers it, Metal: Hellsinger is here for a good time rather than a long time. When I rolled credits after roughly four hours of play I was left with the impression that while it’s undeniably heavy with metal, it’s also surprisingly light on features and content.

Part of that is in terms of its sparse story, and what little plot there is is mainly delivered by ubiquitous voice actor Troy Baker’s narration in between levels. Baker is doing his best Sam Elliott-style southern drawl as he describes our character, a lost soul known as The Unknown who must blaze a bloody trail of vengeance through eight levels of Hell, culminating in a high-stakes showdown with The Red Judge, none other than the Devil herself. I found much of the underworld imagery used in these story cutscenes to be quite striking, like gatefold album covers come to life, but Baker’s accompanying monologues are perhaps a touch too serious in tone. I’m not suggesting he needed to match Jack Black’s buffoonery from Brütal Legend, but a few jokes here and there could have provided a welcome counterbalance to the steady stretches of demon decimation.

There are some standout vocal performances from contemporary metal maestros […] that had me moshing along like I was in the passenger seat of the Mirthmobile.

Each level is accompanied by an original metal song, and there’s a nice blend of styles that range from infectiously melodic anthems to higher-intensity Cookie Monster meltdowns. Its tracklist is uniformly modern sounding, though, so old-school fans hoping for slabs of Sabbath-style classic metal or early ‘80s thrash will be left shaking their heads instead of banging them. Still, while there’s nothing here that’s going to knock Mick Gordon’s Rip & Tear out of the number-one spot in my ‘Music to Murder Demons To’ Spotify playlist, there are some standout vocal performances from contemporary metal maestros like Trivium’s Matt Heafy and Serj Tankian from System of a Down that had me moshing along like I was in the passenger seat of the Mirthmobile.

Unlike Doom or Doom Eternal, Metal: Hellsinger’s bone-crushing musical accompaniments aren’t just there to accentuate your assaults, but rather they serve as your conductor in this symphony of destruction. Timing your attacks with the double-kicked drum beats increases your Fury multiplier, and the longer you can maintain a sequence of perfectly timed hits the more powerful your attacks become – and the more points you rack up, kind of like a heavier version of Pistol Whip only with more freedom of movement. Additionally the soundtrack, which opens each level stripped to its barest elements, slowly introduces new layers of instrumentation as you continue your killing streak until the vocals kick in when your Fury is maxed and the full song is revealed in all its teeth-rattling glory. It provides an exhilarating crescendo to the carnage, and keeping the performance cranked up to 11 demands a challenging combination of rhythm and first-person shooter reflexes that had me hooked throughout each head-splitting serving of kill-spree karaoke.

A challenging combination of rhythm and first-person shooter reflexes that had me hooked throughout each head-splitting serving of kill-spree karaoke.

Enemy waves are strategically staggered throughout each level to maintain your murderous momentum. Standing in for Doom’s Imps are Marionettes, weak grunts usually found in groups to be dispatched in a quick succession of finishing moves that replenish your health and keep your combo chain going. In each arena it’s always good to try and keep a few of these wicked weaklings around for when you need to quickly get back on tempo, since there’s a motley crew of more powerful monsters hellbent on upsetting your rhythm. Giant insectoid enemies spit acid that slows you down, shield-toting ghouls seek to blunt your attacks along with your timing, and blade-wielding behemoths lunge from long distance to knock you out of sync like a broken metronome. Figuring out which threat to prioritise is paramount, and Metal: Hellsinger successfully shuffled its lineup to keep me constantly on my toes. Well, when I wasn’t tapping them along to the music.

There is, however, a lot of room for improvement in Metal: Hellsinger’s weapons arsenal, which isn’t quite as extensive as its enemy types. On top of the default sword for melee attacks and a skull that fires underpowered projectiles, you can equip a primary and secondary weapon from a fairly limited range of just four options. There’s a shotgun, dual-wielded six-shooters, an explosive crossbow, and a pair of boomerang-like blades that can be thrown at enemies from afar. Since every weapon has unlimited ammo, I basically went with a balance of the pistols for accurate ranged shots and the shotgun for its crowd-controlling spray, and effectively kept that same loadout for the majority of Metal: Hellsinger’s campaign. While they each have a special secondary attack that can be charged up, like the pistols’ ability to create a temporary sentry turret, there are no upgrades or modifications to be made, so my first shot fired with each weapon was identical to my last. It’s a shame that Metal: Hellsinger’s hot lead slinging doesn’t dynamically expand as much as its heavy metal singing.

Conquering each of the eight Hells unlocks additional challenges called Torments. These are optional arena fights that shake things up with some appropriately devilish twists; in one, your weapon is randomly switched after each kill, forcing you to frantically adapt your combat strategy on the fly; another does away with health pickups but increases the power of your attacks the lower your health bar gets, which has lead to some pretty intense final moments as I’ve scraped towards the demanding kill counts they require. There are three of these Torments per level and I’m having fun working my way through them (which does help to salve the burn of finishing a playthrough in just four hours), and the successful completion of them earns you sigils that can be equipped in the main levels.

These sigils don’t particularly change how you play, and aren’t really required in order to beat the campaign – in fact, I didn’t come back and start unlocking them until after I’d completed the story on the default difficulty level. However, acquiring them is certainly mandatory for anyone serious about scaling Metal: Hellsinger’s high score leaderboards, since they grant you valuable buffs like preventing your Fury multiplier from ever dropping below 2x, or allowing you to take a hit without it ending your kill streak. You can equip up to two of these modifiers per run, and doing so is crucial if you want the maximum reward for each rhythmically slaughtered horde.

I wish I was personally more invested in striving for high score supremacy, though, because there’s otherwise not much of an incentive to replay Metal: Hellsinger’s string of short-lived slaygrounds. The songs may be unique to each setting, but while the environments themselves are lavishly rendered they’re also structurally similar, and your double-jump and dash abilities are fairly stock standard compared to the more hyper-mobile movement offered in Doom Eternal. Since Metal: Hellsinger is all about maintaining forward momentum, its levels are also extremely linear and seemingly lacking in secrets or collectibles to find, other than the odd Fury-boosting pickup.

It’s also disappointing that – aside from a spectacular final boss encounter – every end level boss is just a slight variation on the same winged demon design. Their attacks differ but your method for killing them is consistent, which means they are impressive to encounter at first but grow increasingly stale with each subsequent appearance. I wish there’d been a different hellborn headliner waiting to bring the curtain down on each groove-heavy gauntlet run. After all, Raining Blood is one of the greatest closing tracks in heavy metal history, but I wouldn’t want absolutely every Slayer album to end with it.