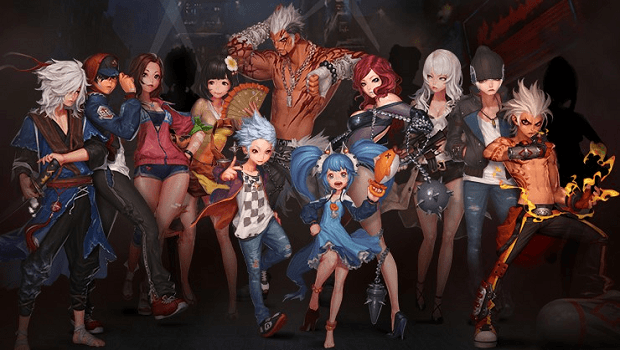 June 21, 2016—Irvine, Calif. — KOG Games, publishers of the acclaimed action epic Elsword, launch CBT 2 for HeroWarz, the ultimate action RPG where players select and cultivate unique heroes to build their personal assault force. Dive into an ever expanding, in-depth, story-driven character lineup and prepare for action-packed battles like no other!

KOG Games is proud to announce that the HeroWarz CBT 2 is now Live!
From June 21 – 24, 2016, all players from the US, Canada, Europe, Australia and New Zealand get to register for an account and play HeroWarz with a host of great improvements. From functionality, UI and content additions, to the most exciting part… a couple of amazingly sexy roster change-ups! Yup, you read it right!

During the HeroWarz CBT 2 phase, players can earn amazing, permanent goodies that will then transfer to the OBT phase of HeroWarz! If players reach the goals quickly, they can kick back knowing they’ve done some good for the future of the world.

Permanent OBT gear can be unlocked by hitting varied character level tiers. For example, players who hit level 30 (with any character) unlock (4) CBT exclusive Costumes! Hit level 70, get a statted Title! Hit Level 100, and get an Emblem! And, just for logging in once, 2 days in a row during this beta phase, players will receive a Pandora’s Silver Chest during OBT. For the players that like to get a jump start on at game launch, KOG Games is offering 3 tiers of HeroWarz Founders Packs with some amazing goodies therein.

These are all exclusive, permanent Premium items being doled out by KOG Games, just as a thank you to all of the players that have enjoyed HeroWarz and given some great feedback, and a “welcome aboard” challenge to next wave of players!

In true CBT fashion, many of the improvements the team applied are based on the extremely valuable feedback the 1stCBT participants sent to the team from the previous round. All of the CBT players from the first round are invited back, but this time around, KOG Games wants even more players in the mix! And, with players from around the world playing, it allows KOG Games and A.Storm a whole new level of perspective and feedback to take in.

The HeroWarz CBT 2 is now Live!  Also, the HeroWarz OBT dates will be announced very soon, so stay tuned and check often!

To learn more about  HeroWarz please visit  http://herowarz.koggames.com/ and stay up to date with real time announcements via the Official HeroWarz Global Facebook page:  Click Here!

All of this brutal, action-packed insanity comes at you with break-neck speed, driven by a wickedly sensual soundtrack! Watch the epic new HeroWarz video by KOG Games, and nod your head to Cyberium (On Speed) by Razed in Black, brought to you by Cleopatra Records!

Humanity’s greatest strengths have been found in its darkest corners – Play HeroWarz!

About KOG GamesBased in Irvine, California, KOG Games is on a mission to bring people together by providing fun games. Founded in 2010, KOG Games combines extensive game development and publishing expertise to bring you Elsword, the award-winning free-to-play massively multiplayer online game, and will soon launch the isometric Action-mmorpg, HeroWarz.