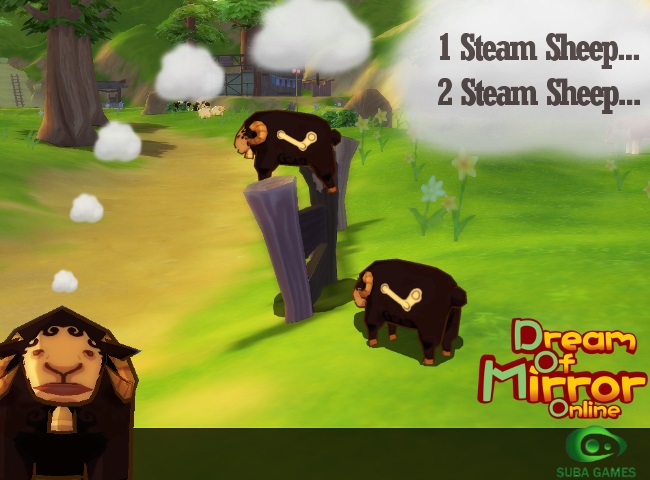 DOMO, a free-to-play MMORPG has launched on Steam and has decided to offer players a code for a pet sheep. Post in the thread below requesting one, and it will be sent via email.

Instructions on How to Redeem Code on Steam:
On Steam go to Library -> + Add A Game… button in bottom left -> Activate a product on steam

A cute and cuddly miniature sheep with a steam logo shorn into its wool that will follow the player around.

Dream of Mirror Online is the re-launch of a much beloved mmo the likes of which have never been seen since its departure. The amount of excitement surround this re-launch can be seen in our unique Kick Starter campaign which reached its goal in less than 24 hours and has accrued more than 3000% of its requirement to launch. With such a large and passionate fan base the game has already been successful on Steam Greenlight even before launch. There has been a lot of excitement for the journey of Dream of Mirror Online to restart and continue stronger than ever in the future.

Story
It is a time of myth and legend, where great heroes rise up to fight side by side, united against the instruments of darkness. Take a journey into a fantasy linked by fate to another, a mirrored world that reflects the chaos that has erupted within mankind. Establish relationships and find new friends, take up a job, or soar through the majestic skies on a variety of mounts as you rediscover a social MMORPG beloved by many around the world!