dotAGE is a merciless, turn-based town builder in which you are a prophetic village elder. Developer Michele Pirovano told us more about it.

If you’ve had enough of everyday city builders, dotAGE is changing things up in three very interesting ways. It’s roguelite, for one, and it’s turn-based, and on top of that, you play as a prophetic elder seeking to stop the Apocalypse itself.

Described as ‘cute yet merciless’, dotAGE will have you contending with a complex Fate system, which throws a variety of events at you. Heat, cold, fear, sickness, even earthquakes, plagues, and murders, will all challenge your village-elder skills in this title.

We talked to developer Michele Pirovano of CKC Games to learn more about the game and its origins. 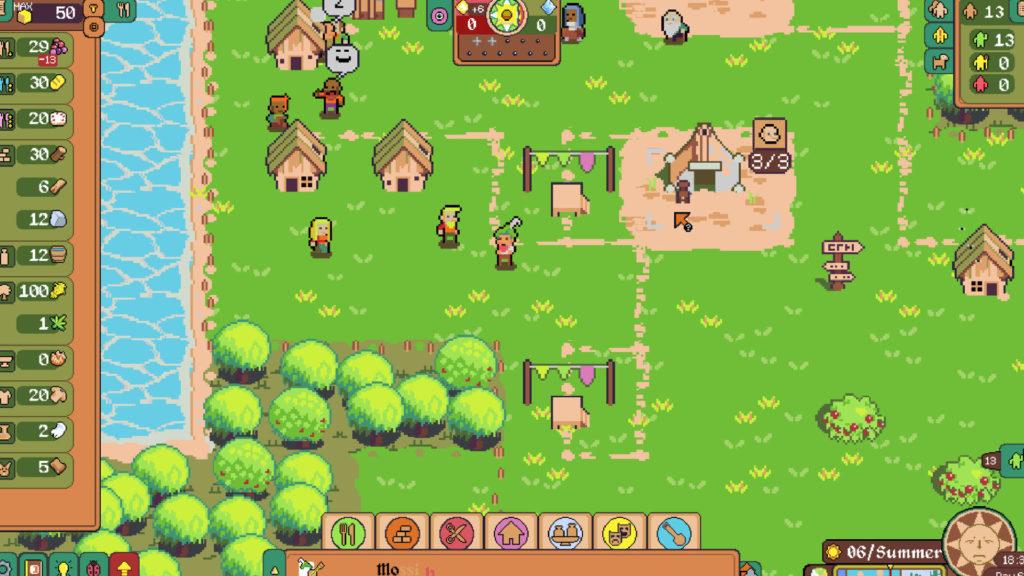 Tell us about the history of CKC Games and your journey up to this point.

CKC Games is a team of 4, composed of me and my 3 cats. They introduce the bugs and I am left to fix them!

I created this label almost ten years ago to connect the small games I had been making during all the game jams I participated in at the beginning of my career, and it stuck with me since then. CKC stands for “Curiosity Killed the Cat”.

After finishing my PhD in Computer Science, where I worked on applying video game design concepts to physical rehabilitation, I started my gaming career as a freelance gameplay programmer & designer, specialized in AI thanks to my academic background. Since then, I worked on many different games for several contractors, but I always kept working on the side on my pet project: dotAGE. I kept working on it with the little time I could scrape by.

How did you first conceive of dotAGE? Did the city builder concept come first, or was it the old man?

I had been toying with the idea of making my own village builder since I started learning how to make games. I prototyped a classic real-time 3D town builder many years before, but I was so bad at making it (remember that I am no graphical artist, so my models were very crude!) and it had nothing new, so it had no chance to stand out. I just scrapped everything and threw it in the bin. 😉

In 2014, I played FTL. The game’s stellar and novel design, with so many mechanics mixing multiple new ideas together that just worked to create something truly new inspired me! It felt so fresh, and novel. 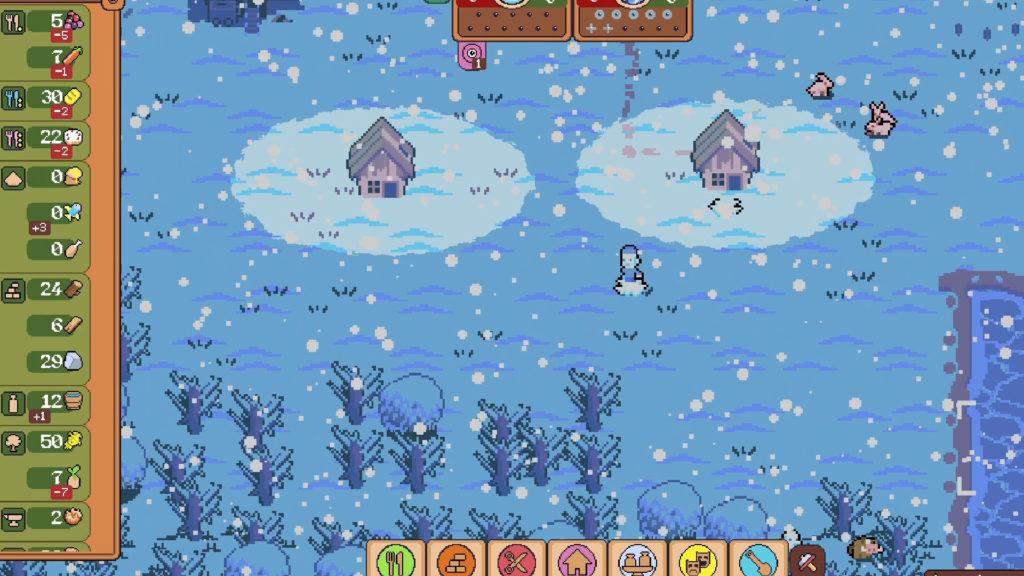 I decided to try and make a game merging two very different ideas, and I wanted to make it with my own ideas and mechanics. I retrieved my old idea of a town builder, but with a twist: what about a peaceful town builder mixed with the dynamic and chaotic nature of randomized events found in games such as FTL?

That’s how dotAGE started. That’s also when the elder and the turn-based aspect were conceived, and when I decided I wanted to draw it from scratch, learning pixel art. Since then, I’ve been spending years iterating on the mechanics, code, and graphics, finding so many new problems to solve, throwing myself into the uncharted territory of this weird design.

…in Italy, it is customary for elders in their retirement to stand by construction sites and watch, often giving their own opinion on how badly people are working.

Regarding the elder… It has been a few years now and, just like the elder in the game, I cannot remember all the details, but I remember the idea of the old man just came out of the desire of having a funny proxy for the player inside the village.

The game is full of ironic puns, both visual and in text, and in Italy, it is customary for elders in their retirement to stand by construction sites and watch, often giving their own opinion on how badly people are working. So I went with that idea. The elder’s vision were the next logical step… 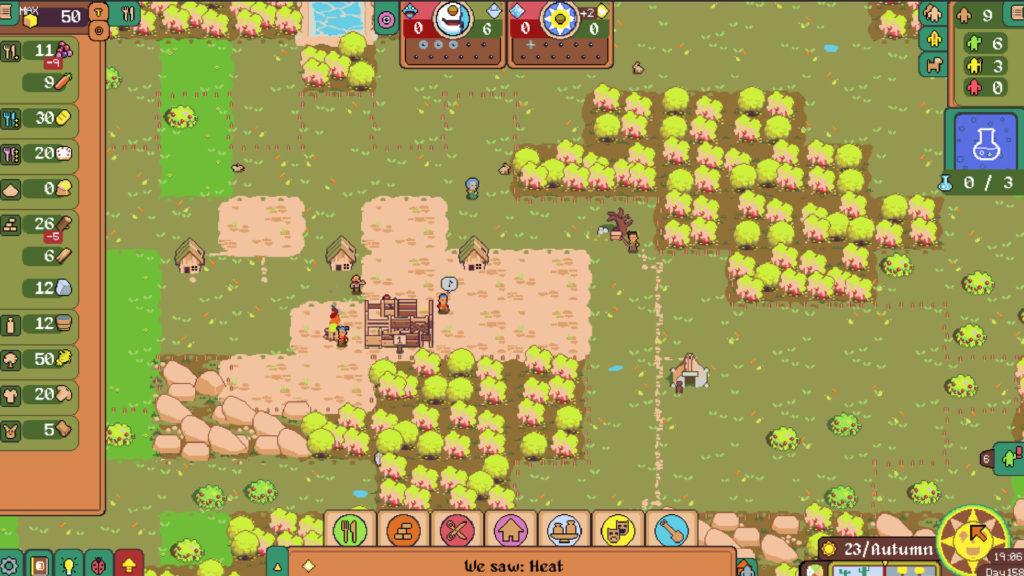 How does playing as the village elder make this game stand out from other town builders?

For starters, he is no ordinary elder! He’s a prophetic visionary who has seen the future, which is when an Apocalypse is going to hit the village. That is why he’s so determined, and why he always runs around yelling at Pips to work – they have little idea of what dangers lay in their future.

The dual nature of dotAGE, being a cute town builder on one hand, and a merciless and dramatic apocalypse-is-coming simulator on the other hand, is core to the nature of the game and what I think differentiates it a lot from other town builders.

In addition, the turn-based nature that makes it play more like a boardgame, its roguelite nature that makes each game unique, and the AI-driven FATE event system that governs what will fall upon the tiny village, and you see that there are many things that make dotAGE stand out.

It’s also why I decided to make a demo for it, as it is hard to explain how differently it plays in respect to other town builders, as I have been exploring its mechanics for years, instead of making a worse copy of existing games. 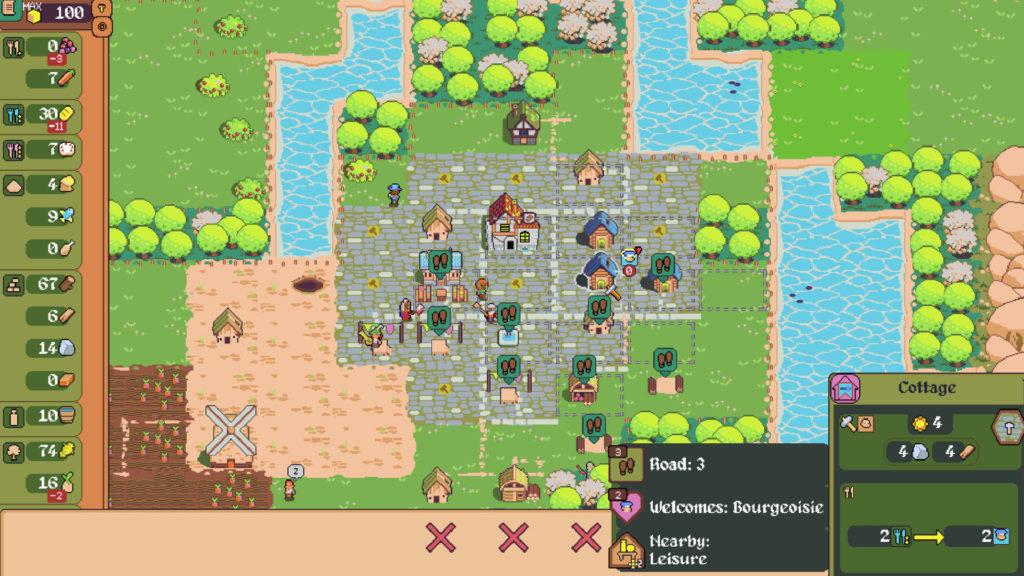 Which games (or other works) inspired you in creating dotAGE?

It’s hard to list them all! I love to take inspiration from all kinds of games and try to see what works, and what doesn’t.

The Settlers is an obvious inspiration, as the graphics, the style, and the voices all come from my memories of the Amiga era of when I was just a little boy.

Regarding gameplay, the main inspirations are still games, albeit not digital ones! dotAGE’s mechanics are primarily inspired by board games such as Agricola, Stone Age, and the many worker placement Euro board games of which me and my wife are great fans. That is why the game plays a lot with its limited space, and with the building requirements that make it hard to place a building optimally.

dotAGE’s mechanics are primarily inspired by board games such as Agricola, Stone Age, and the many worker placement Euro board games…

The Civilization franchise is another large inspiration, with its “one-more-turn” approach which I studied a lot and tried to replicate in dotAGE.

Then, there is of course FTL, inspiring the FATE event and its hundreds of ugly events. Events are another element that is filled with inspiration! I got ideas from countless books, stories, and movies. We are also big cinema fans, so you will find a lot of movie references and tropes throughout events, starting from cult classics and moving a bit towards horror eldritch inspired novels. 🙂 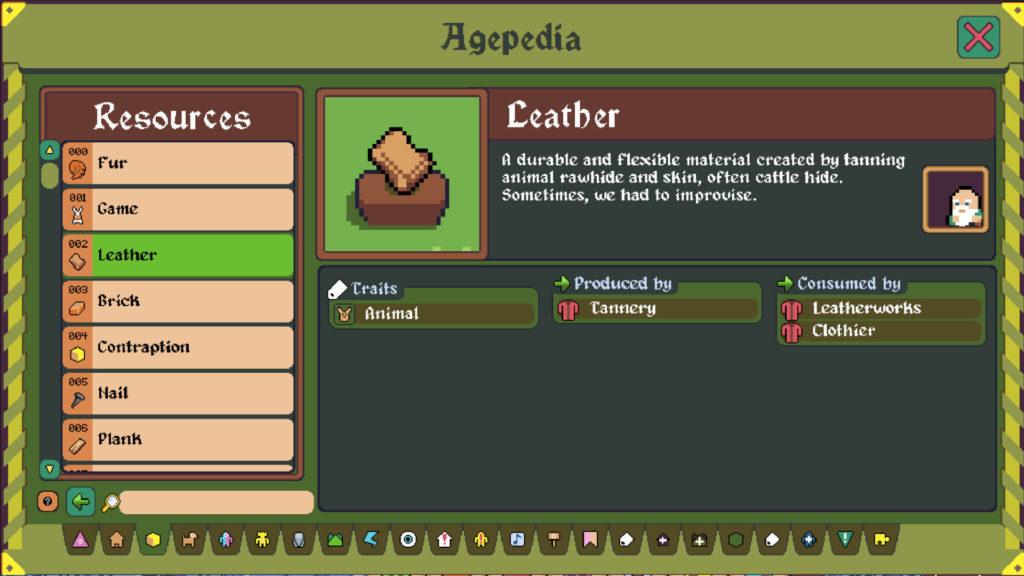 dotAGE is described as a merciless village sim, so we expect to lose a lot. However, it is also a roguelite. What carries over from each defeat?

We must remember that medieval times were a very awful period to live in, even if we often depict fantasy medieval life as this grand, romantic period. I wanted to work with that big contrast and rectifying things, starting from a cute village and descending into the horrors of the medieval times. Sickness, rebellions, criminality, heat & cold, famine and many more catastrophes will be met in the game, and make it a merciless experience.

Your village is doomed to fail with great probability, sooner or later, which makes the feeling of impending doom so great.

The game plays with the roguelite feeling more than it does with the genre’s mechanics. Your village is doomed to fail with great probability, sooner or later, which makes the feeling of impending doom so great. Of course, there are typical mechanics you can find in roguelites which are used to give your village a different twist every time.

For instance, the story of the village is narrated through the elder, and the elder’s memory is not as good as it once were, so, as you start your first game, the mechanics and content you can find are limited. With time, he will remember new buildings, resources, terrains, jobs, animals, and even races and entirely new mechanics, which are added to your games as you retry the story. Every time you start a new story, then, the game can be different! 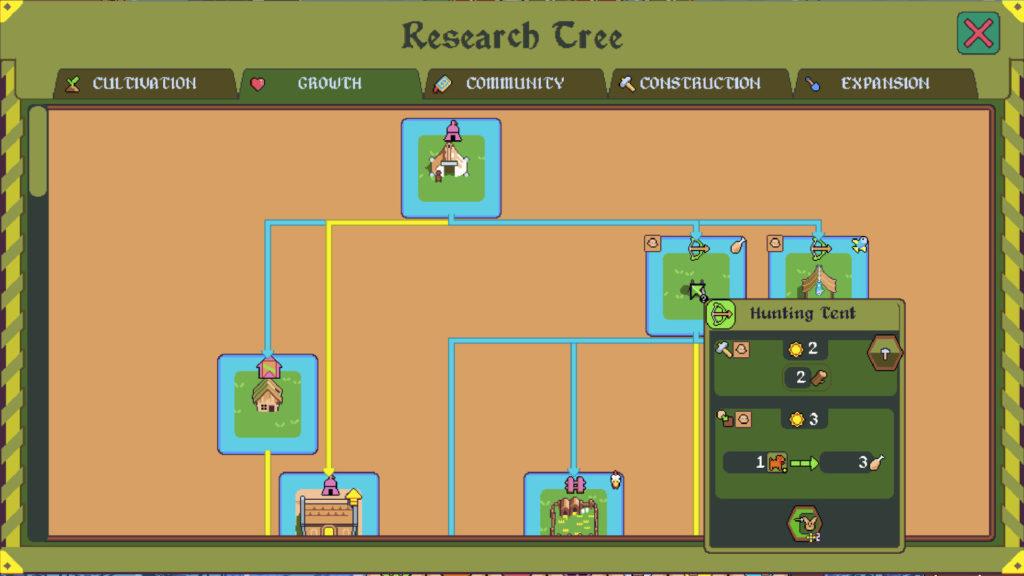 When can we expect to get our hands on dotAGE and on what platforms?

Since I’m working on dotAGE in the little time I can scrape during my freelance work, I do not have a release date yet, but the beta is going strong thanks to the testers that are helping me (the demo is just a tiny, tiny bite of what we have in the game!) and I’m working hard to balance the content that to hopefully release before the end of the year.

I already had to move the release date several times, so I will however announce an official release date only when I feel the game is where it should be in terms of quality.

The game will be released on Steam for Windows, OSX and Linux, but I would love to port it to consoles later, and I have already implemented joypad support. The turn-based gameplay is perfect for mobile consoles, for example. 😉 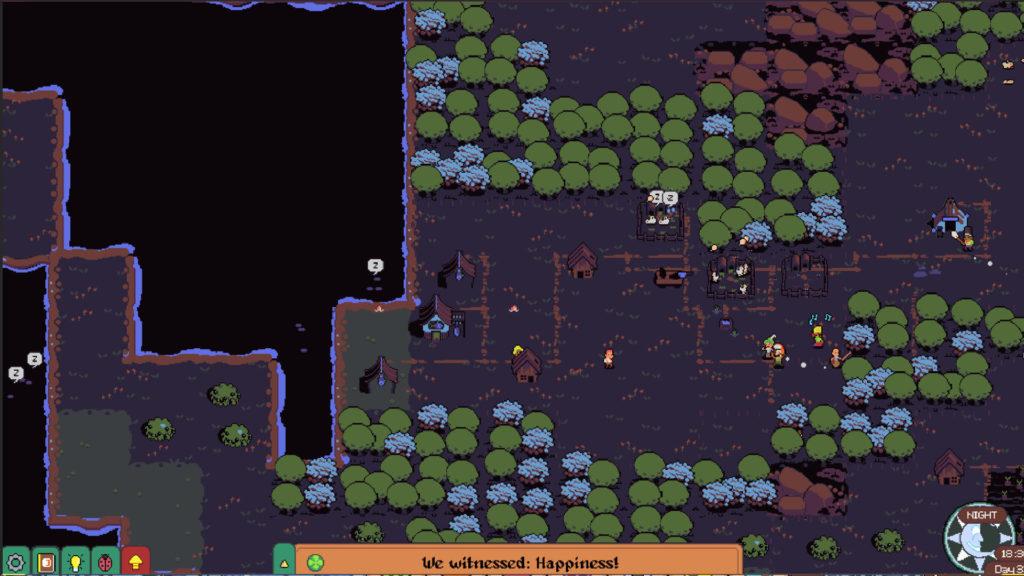 You’ll find dotAGE here on Steam, and you can also stay updated on the game over at the official Twitter. Finally, have a look at the game on Michele Pirovano’s website here.

For more previews and interviews of upcoming indie games, check out the Previews section here!