Children’s author Kate Hannigan has recently released a children’s picture book that focuses on Ralph Baer, the man credited with inventing video games, well before Atari made Pong. Titled ‘Blips on a Screen’, the book has been published by Alfred A. Knopf and released on May 3rd this year.

Ralph Baer, born in 1922, was born in Germany during the Weimar Republic. While he was a child, his family fled to the United States, and Baer served in the American war effort during World War II. After the war, he went on to invent the first video game system playable on a television set, ‘the Brown Box’. This later became the first commercially-produced home console in the world, the Magnavox Odyssey.

Although Baer passed away in 2014, his contribution to entertainment continues to be enjoyed by billions worldwide.

We asked Kate Hannigan a few questions on Blips on a Screen and how the book came about.

What inspired you to write a children’s book on Ralph Baer?

The short answer: my game-loving son. I enjoy writing nonfiction and historical fiction for young readers, to show them remarkable people and possibly ignite the spark that makes THEM want to do something remarkable in their own lives.

So I was inspired to write about Ralph Baer’s story after staring at my own sonny boy playing video games. I asked a simple question: Where did this all begin? I wanted to know who launched the world on this video gaming trajectory, since it’s such a big part of my lad’s life. And the lives of billions of people around the world! 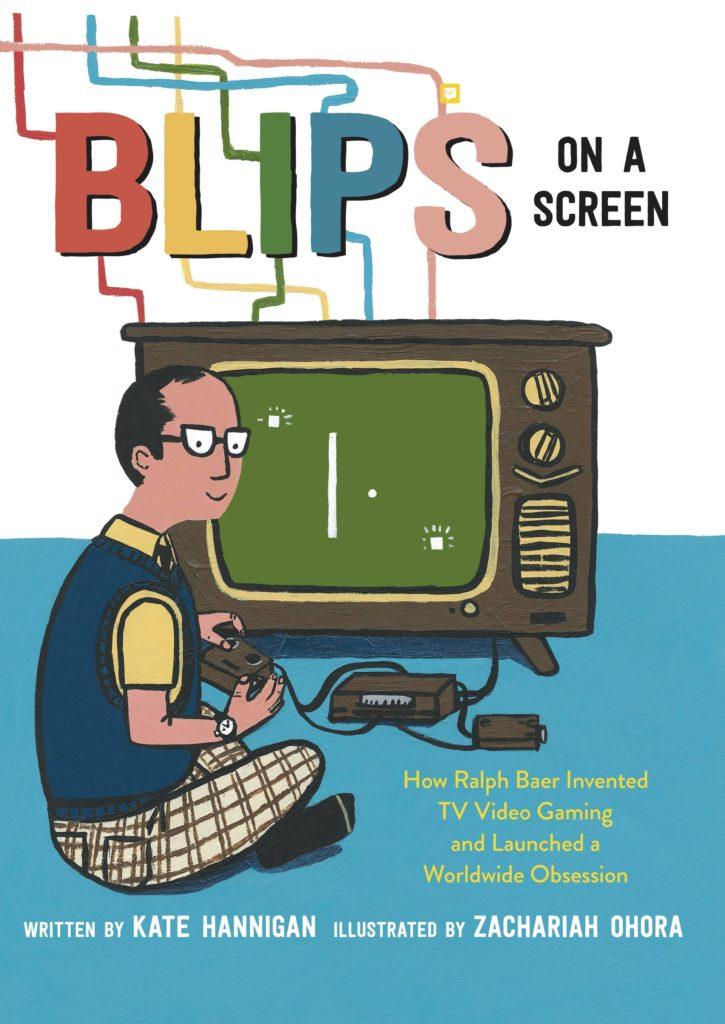 How did you research the topic?

I come from newspaper journalism, so I always begin there. And with books. When I read articles referring to Ralph Baer as the “father of video games,” I started digging deeper. I try to watch documentaries if they’re available, and so I came across Ralph Baer’s early demonstration of his video gaming invention.

But my favorite part of research is finding people in real life to speak with. In Ralph Baer’s case, he had passed away. But his three kids—the world’s first kid gamers!— were incredibly helpful. Mark Baer manages the Ralph Baer Trust and was generous in talking with me.

What does the title of the book, ‘Blips on a Screen’, refer to?

When we look back as far as we can into TV gaming, it takes us to Ralph and what he accomplished: getting one blip to appear on a screen. Then another and another. When he was able to get three blips to appear, he has this great quote where he says they knew what they had: sports games! So we see a lot of ping-pong starting out!

The fantastic graphics in games now were not there at the beginning. It’s fun to show kids that it all started with a few blips. That it took years and more development to get to the beautiful graphics of like a Mario Kart or FIFA!

What do you think can young readers take away from reading about Ralph Baer’s life and achievements?

I would hope kids take away a little understanding of what inventors are like: they look at things and want to make them better. What a great approach to life! And I hope kids get excited about what THEY can do, what great world-changing invention THEY can come up with.

And that it takes persistence and perseverance to make things happen in life. Ralph Baer worked years to refine his idea. And he heard a whole lot of “No!” before he finally heard a “Yes” from Magnavox to develop his gaming system.

But also, stepping away from the STEM aspect of the book, I hope young readers look at Ralph Baer’s life experiences and develop a sense of empathy. That’s the most important reason we read and share stories—to tap into our common humanity.

Here was a boy who was shut out of school and contact with his friends because of Nazi hatred. Who was forced to flee for his life, who saw family perish. I hope when young readers hear about refugees in today’s news, they can think about Ralph Baer’s story and feel something—that a refugee is a human being.