Partnership Article: Arch Legends is currently in Beta, and launching a Kickstarter on 24 May 2022 to raise funds for the production

The creators have a mission behind this Training Card Game (TCG). They are using real historical legends like King Arthur, Sun Tzu, and Zenobia to be creature cards. The first edition on Kickstarter contains legends from the Arthurian, Arabian, Norse and Three Kingdoms eras.

Their goal is that each booster pack comes with a video card of the legends as a separate video production. Players can watch the videos and learn how our ancestors overcame difficulty, their history, mindsets, and philosophies.

The true mission of the company Ontario Creatives is to strengthen the people’s mindset and problem-solving skills. This ties up with the game mechanic “Legendize” in the game, where all Legend cards has two sides. One is the normal side when summoned, and the other side is a powered-up version that is activated when Legendized. 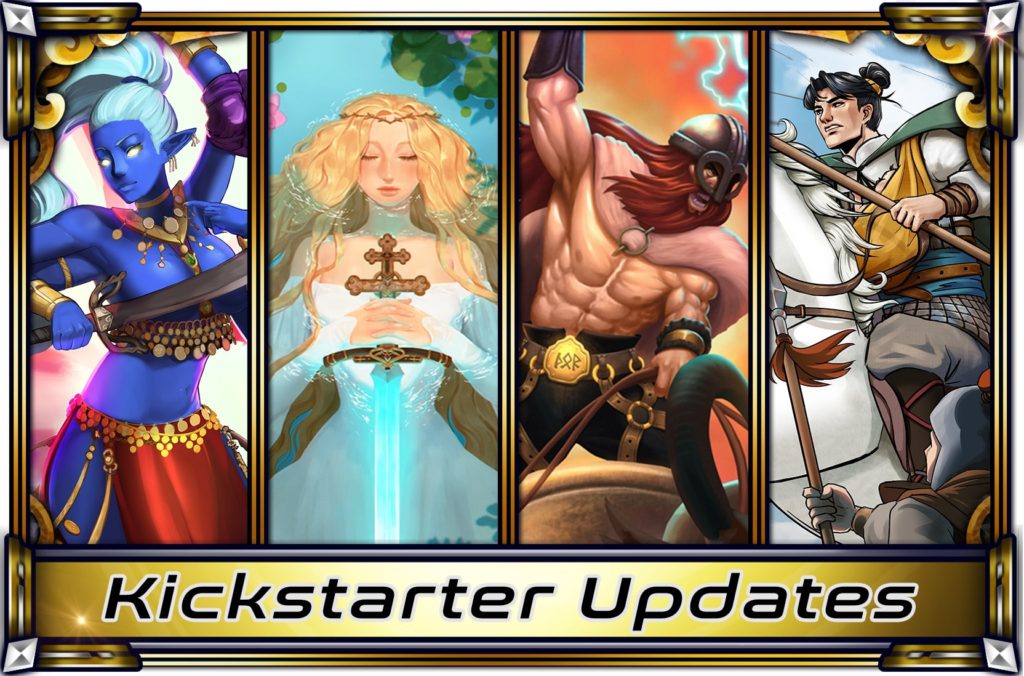 As for game mechanics, this game is highly unique. You start off the game with 3 Legends on your board right away. This is done by taking the top 3 cards from your randomized Legend deck. Each of these legends provide Knowledge. Knowledge is your resource needed to use cards like equipment, skills, magic, tactics, and chaos.

This means that within the first turn, you are already using cards and tactics to charge towards your opponent’s base.

In different playthroughs, some games are more difficult because you draw 3 warriors at the start. They can be tanky and strong, but also have little Knowledge. Hence, you are stuck with a lot of high costing cards in your hand. A seasoned player would need to balance the power of their decks by putting in “Smarter” legends like Merlin, Zhu Ge Liang and Lady of the Lake to provide higher Knowledge.

Talking about Knowledge, when you make a pure mage deck with plenty of sages that have a lot of Knowledge, it would be a fast-paced spell slinging deck. However, if you somehow fail to freeze the opponent with an ice spell, they could potentially wipe out all your mages in a single turn.

An amazing feature about this game is that you can design your own Battlefield terrain as well. The game is played on a 5×5 battlefield terrain with your Base card closest to you. There are currently four bases, Camelot, Ibrahim Palace, Great Wall of China, and Yggdrasil.

You can play around with different Bases, and realize they provide very different gameplay as they have different abilities. Great Wall of China boosted Legends Defense within its borders, great for a mage deck. Camelot would be fun as well for the knights powered up buff, making it a very offensive combination. Ibrahim Palace provides knowledge and healing, both of which are very useful.

It can be a little intimidating to navigate the movement on the battlefield at first, but after realizing it is like a chess board, things are much simpler. The mountains are restricted areas, good for blocking opponent advances. The lava burns any legends standing on it each turn, great to form a choke point for defense. The sea is marvelous when the opponent has armor equipped, which reduces their damage taken. Sea reduces their Defense by 1. 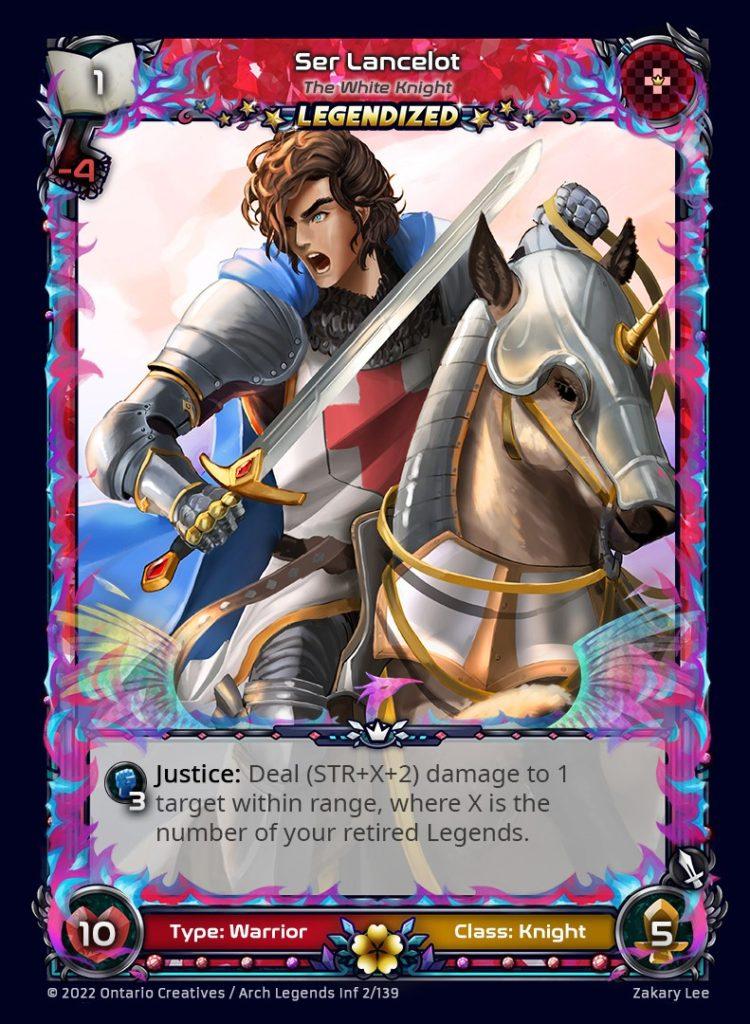 Every new game provides an entirely different gameplay. This is because the battlefield lands are randomly placed on the battlefield. So even if you preconstructed plenty of mountains into a battlefield land deck, you could still end up with an open straight path between the opponent’s Base and yours. It’s fun to see what could happen to an opponent.

Now you might wonder, if there are no cost to summoning Legends, isn’t it going to be a contest of whose cards are more “rare and powerful”? The answer is no.

That is because when Legends die, or in this game’s term ‘retired’, they will cause a Morale penalty to your base. You start the game with 10 Morale points. You lose the game when this morale score reaches zero.

You could draw only high tiered Legends and your opponent could summon only the ordinary ones. You might realize your Morale dropping faster than theirs because yours are “renowned” Legends and they have higher Morale penalty. Though more powerful than your opponent’s, if you are not careful in your attacks and you could end up being boxed up and annihilated, causing massive blows to your Base’s Morale.

As your Legends retire, you are then allowed to summon newer Legends from your hand onto the battlefield. This is because there is a limit to how many Legends you can control on the board, denoted on your Base card. The Base cards can Legendize as well, providing a higher Legend limit and greater abilities.

As your newer Legends join the battlefield, they increase your permanent Knowledge Well. Having more Knowledge means you have a comeback chance by using high tiered equipment and tactic cards you previously couldn’t. The game creators designed it this way to balance the game, constantly having either side turn the tides of battle.

As for combat, a lot of thought has been put into its mechanics. When attacking, each Legend has an Attack Range. For example, Warriors can only attack opponents standing next to them, while mages and archers can shoot enemies multiple spaces away.

The opponent can also counterattack. Hence to really optimize your offence, you must plan how your ranged characters blast at a melee opponent first to wither down their HP, before your warriors go in for the kill. HP of each Legend is not refreshed after each turn, hence planning for a drawn-out fight is possible and enjoyable.

Certain Legends come with combat skills. They can unleash special attacks which cannot be countered, but with a cost. This allows for added strategy in planning when to best use the Skill. Either that, or you can fill your deck with Skill cards to go blowing things up with Power Strikes, Explosive Arrows, and Fire AOE spells.

Other cards that change game play are Equipment cards, Tactic cards, and Chaos cards. A properly equipped Legend is a beast because armor adds Defense, and it basically reduces damage taken. It is also fun to equip Arthur’s Excalibur on Thor and Thor’s Mjolnir on Heimdall.

Tactic cards provide all sorts of effects, buffs, and abilities. You will notice that a lot of their cards are taken from historical warfare. For example, the Phalanx Formation and the Chakravyuha Formation cards, these cards were troop formations from Greek and Indian wars.

Chaos cards are cards that can be used at any time, giving you the advantage to spoil your opponent’s plans when they least expect it. Currently these “counter” cards could only target opponent’s Tactic cards, but we can expect more variations to come. 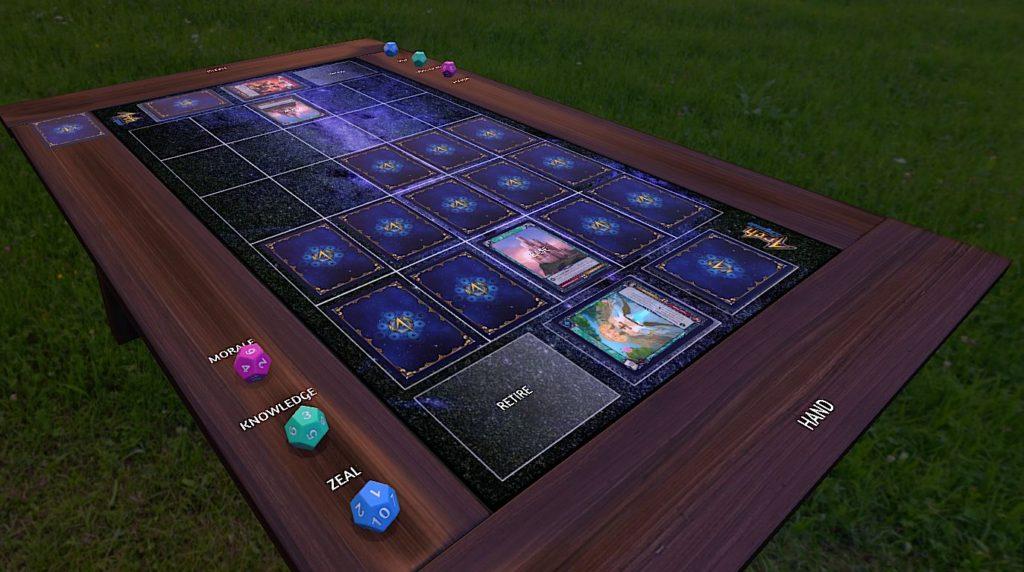 Seeing such a vast world of cultures and real historical Legends, you’ll be interested to learn more about the lore of the game. The development team plan to roll out web novels named Arch Legends. Currently you can read them on the Arch Legends website or on major web novel sites. They have also revealed the manga to be released once more chapters of the novel has been completed.

There is unlimited potential for this game, both in terms of game play, combos, as well as education. With their first expansion after the Kickstarter, which include Japan, Egyptian, Roman, and Indian era Legends.

The more expansions roll out, the more historical Legends from various cultures will be added. Perhaps one day, your own culture’s heroes will once again be inspiring us to be like them and changing the world like they once did.

You can support Arch Legends and learn more on the official website. For more previews from Into Indie Games, take a look at our preview pages.